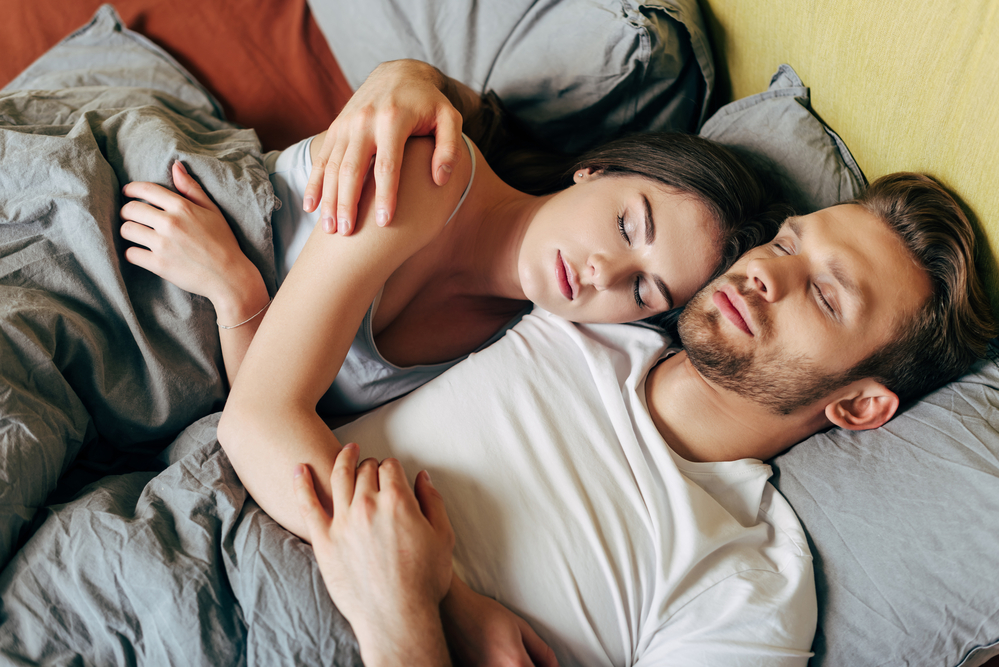 Common Couples Sleeping Positions & What They Mean About Your Relationship

Whether you're in a new relationship or you've been with your partner for years, the way you two sleep together can say a lot about your relationship.

Some days you may want nothing more than to come home and cuddle up next to your partner. Other days, you may want a little space between the two of you.

According to a recent study by The University of Hertfordshire, the most popular position for couples to sleep in is back to back, closely followed by facing the same direction, with one of the least common being facing each other. (Source)

The way a couple sleeps can provide deep insight into their relationship. However, not everyone is the same, and often times sleeping with distance between you and your partner is a sign of independence, not a lack of affection.

Get The FREE Guide

Here are the most common sleep positions for couples and what they mean in terms of body language:

1. The Tight Spoon - For HoneyMooners

This couple's sleep position is prevalent at the beginning of a relationship. Unlike a standard spoon, the tight spoon is nothing short of a backward horizontal hug.

Most new couples are in the honeymoon phase and can't get enough of each other. If you and your partner sleep like this, you can bet that your relationship is off to a great, affectionate start.

Couples who sleep facing the same direction and close to each other and touching, aka the spoon, are often in a mature relationship and comfortable and affectionate towards one another.

Similar to the one above, the chasing down sleeping position involves both partners sleeping facing the same direction, but the "little spoon" is up against the edge of the bed, while the "big spoon" is often more towards the middle, or encroaching on the little spoons space.

This can mean a few things. First of all, this could mean that the "little spoon" wants to be chased. He or she wants their partner to go out of your way to show affection and comfort.

However, it could also mean the opposite! Ouch.

Couples sleeping in the chasing down sleep position could also be a sign of the "little spoon" wanting space and the "big spoon" being too clingy.

You typically experience this sleeping position after an intense, emotionally bonding experience (mostly sex, but it could be anything!)

Whether it's sexy or not, if you and your partner sleep facing each other with all of your limbs seemingly intertwined, this is a surefire sign of a deep physical and emotional attachment.

While this isn't the most comfortable sleeping position, it can be a great sign that you and your partner are absolutely crazy about each other.

When couples sleep facing the opposite direction and not touching, many people would be quick to assume that a relationship is on the rocks.

This couldn't be further from the truth!

In fact, nearly 27% of couples sleep this way. Couples that sleep facing away from each other and not touching are often in a mature, healthy relationship built on trust and independence.

By facing away from each other, the couple is showing that they trust their partner, and don't need constant reassurance to keep that trust.

According to sleep and relationship psychologist Corrine Sweet, couples who sleep back to back are comfortable and trusting and are "connected and secure in themselves. This position shows both closeness and independence in (their) relationship" (Source)

6. The Moon Landing - Transitional Period In The Relationship

The Moon Landing sleeping position is when a couple sleeps back to back with only their butts touching. While this position can sound a bit odd, its actually a sign of a transitioning relationship, and people who sleep like this have likely been together a while.

If you and your partner sleep like this, you're likely transitioning away from the honeymoon phase of your relationship into something more substantial and meaningful.

If you're not the spooning-type of couple, most mature relationships hit the moon landing phase and eventually transition into the decoupled couple position.

Every relationship is different, but digging into the psychology of sleeping positions for couples can be a great learning activity for you and your partner.

What position do you sleep in? Let us know in the comments section below!

Courtney is the reason The Sleep Shop exists. She’s a Seattle native with a passion for healthy sleep. She graduated from Seattle Pacific University with a major in marketing. She started The Sleep Shop to help friends and family choose a good mattress, and helped grow the site to what it is today. She does most of the product testing and reviews.

2 thoughts on “Couples Sleeping Positions and What They Mean”